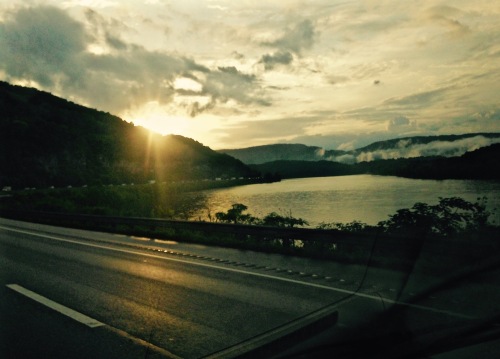 Sarah asked me to be her guest blogger this week so that I could chronicle my epic journey from Chicago, IL to Jacksonville, FL (and back) to pick up her special-est friend, our dog Mishka. I warn you in advance, dear readers, that I have a lot to document, so this post is likely to be rather longer than that to which you may be accustomed.

I began writing this post in my motel room just off of interstate 75 in Corbin, Kentucky, about halfway between my origin and destination, listening to the high-pitched whine emitted by a surprisingly noisy, but efficient, air conditioning unit. But wait… that’s kinda the end of this chapter, so let’s rewind.

This chapter really begins somewhere around Indianapolis, where my Google Maps navigator forgot to provide directions at an admittedly confusing, four-way split in the highway. By the time I realized my mistake, I was well on my way into a land with a population that appeared to consist entirely of skinny, white dudes with meth-teeth and facial hair that looks like they trimmed it with a hunting knife, and really really fat people, all of whom hang out in Walmart, apparently (seriously, I went to Walmart).

[Sidebar: there are lots of places in America that catch a bad rap for being backwards or whatever, and Kentucky is certainly among these but likely not the worst (looking at you Mississippi), and that’s really not fair. America’s full of lots of genuine, cool, and/or interesting people who live in shitty places and lots of genuinely shitty people living in otherwise cool places. That said, there’s a kernel of truth behind every stereotype, right?]

Anyway, as the sun was setting I pulled into the town of Corbin, Kentucky for the night, attracted mostly by the fact that they had a selection of motels and a Sonny’s barbeque, which seemed like a tasty prospect for dinner. I bought ribs from a dude who I’m pretty sure was a.) gay and b.) a vegetarian, both of which seemed like unusual qualifications to be working at a Kentucky barbeque joint (although I support his right to do so, of course), and began my hunt for some beer. This turned out to be quite a bit more complicated than I expected, as it seems that I was in one of those counties where alcohol sales are restricted to designated liquor stores (even the aforementioned Walmart didn’t stock anything). Dinner and refreshment sorted, I found myself a motel. Now, as I said before, I had a pretty decent selection available so I did a little price comparison and decided that I’d try “The Knight’s Inn” (pictured below). After all, I’d seen a bunch of these along the way so it had to be a chain and chains are standardized, right? Plus it was about $50 cheaper than any of the other places around and all I cared about was having a place to sleep. Little did I know that I was about to find out why it was so much cheaper. 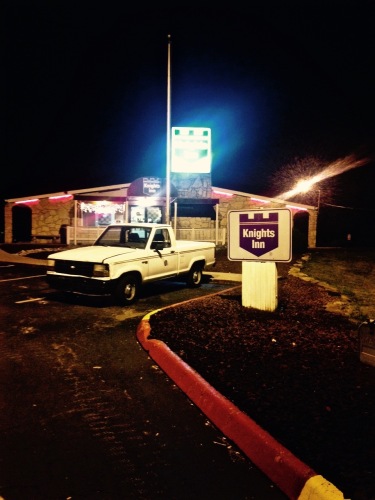 I had a nice chat with the girl at the desk and went off to find my room for the night. When I opened the door, I was greeted with something that looked like someone had been holed up in the room for a week, living like an animal. The beds were completely stripped of sheets and all of the other furniture had been strewn around and overturned, save a single table covered in several meals’ worth of food, in varying states of decomposition. For a split second, I actually considered making one of the beds before my better judgement took hold and I returned to the office to report my findings and request an alternative.

My second room was better, though only in the sense that the bed was made and it didn’t appear to have any rotting food lying around. It was still gross enough that I immediately decided that I’d be sleeping on top of the covers for the night (room pictured below). (They also had a “free breakfast” offering (also pictured below) which was, well, I’ll let you form your own opinions on that one.) Turns out, I wouldn’t have to worry much about sleeping that night, but I didn’t know that at the time. I cracked a beer and settled down for some dinner, after which I stepped outside for some fresh air. Now, this motel was one of those where you can pull your car right up to the door of the room you’re in and chained to a post outside of each door is a trash can. When I opened this to throw away the remains of my dinner, I was overwhelmed with a stench like nothing I knew could exist on earth. I quickly shut the lid and then, holding a deep breath, cracked it open once again and peeked in to investigate what could possibly produce such an other-worldly stench… a rotting possum, I think, although it was a little hard to tell since it was in an advanced state of decomposition and was covered in a sizable pile of vomit (perhaps some poor soul like me with a weaker stomach encountered the same nasty surprise?). This, dear readers, is most certainly NOT pictured below, as I don’t care to be responsible for the sort of trauma seeing something like this might cause you. 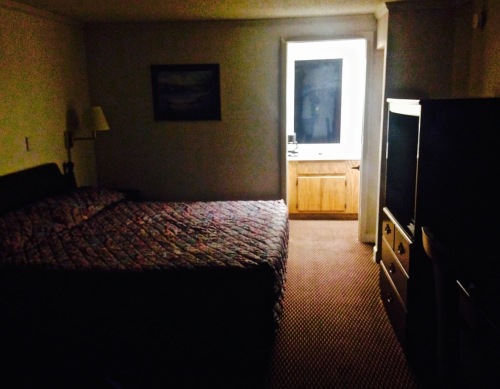 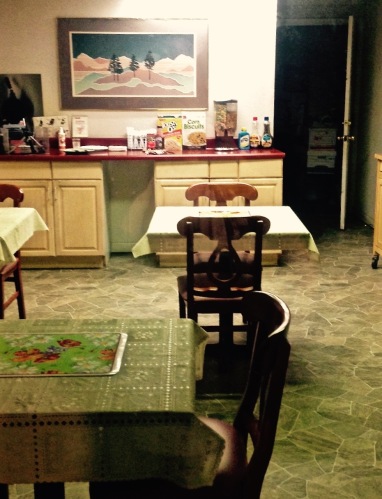 It was around this time that a dude walked past me, heading towards a room a few down the line. We exchanged the standard, dude-to-dude greeting (slight nod without making direct eye contact) as he passed and then all hell broke loose. A white car came screeching around the corner and a woman (jilted lover, perhaps) launched herself out of the driver’s seat like a ballistic missile to begin whaling on him. I mean, no holds barred, kicking, punching, grabbing hair and slamming him against the car. Honestly, the dude looked just as surprised as I probably did. Had the roles been reversed, I’d like to think that I would have tried to intervene, but as it was I decided it was probably better just to quietly slip back into my room rather than become a secondary focus of this woman’s ire. And then, of course, I did what anyone else would have down—watched the proceedings through the door peephole. And they didn’t stop for most of the night. While I’m not sure it was the same two, the rest of the night and into the wee hours of the morning were punctuated by the sounds of various fisticuffs every hour or so.

So the next morning I departed mildly hung over (if you can’t sleep, might as well drink, right?) and very tired to complete my journey. The rest of the drive, I’m happy to say, was entirely uneventful and really quite beautiful, as my accidental detour ended up taking me through a section of Tennessee’s Great Smoky Mountains.

So now, dear readers, I safely sit writing from the Chicago suburbs after a return trip made pleasantly boring by a series of better decisions on my part, ruminating on how you don’t have to be in a developing country to have crazy experiences and just being in a “developed” country doesn’t necessarily exclude the possibility of running into some (let’s just call them) interesting people. Happy to say, also, that all’s well that ends well—best friends were re-united and I got a pretty fun story to tell. Hope you enjoyed it. 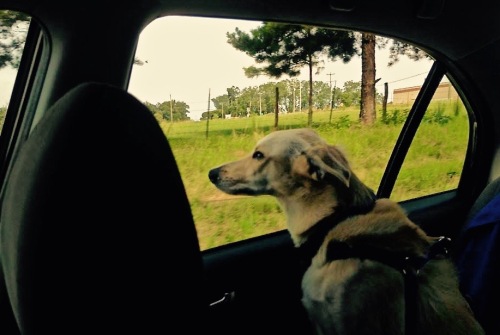 Sam Kraegel is a Foreign Service Officer and husband of your usual weekly blogger, Sarah Kraegel. His weekly contributions to this blog are both subtle and invaluable. All photos are by Sam.