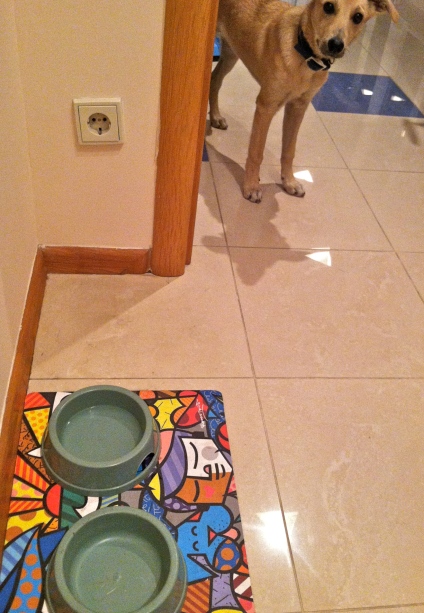 While Hank gets fed two times daily (6 a.m. and 6 p.m.), Mishka gets a proper breakfast, lunch, and dinner. And she always eats like the wild, wormy street mongrel that she is.

Halfway into her lunch one recent day, Hank decided that he would like some, too. He stepped delicately up to her food bowl to take a bite, which caused Mishka to eat even faster. This was clearly meant as a message to Hank who, like Mishka, loves food.

But Hank didn’t back down. Mishka was nearly inhaling her food chunks now, slowly pulling the food bowl out from under Hank with every bite. He still didn’t get it.

The situation reached a feverish pitch. As a desperate, last attempt, Mishka did the meanest thing she could think of: the “scream-bark.” Half-scream, half-bark, straight into Hank’s face.

At last: results! Unperturbed, Hank turned coolly around and left the scene. Unfortunately, what he thought was a smooth exit, well, wasn’t. As he sauntered up to me, it became clear that the scream-bark had not only been effective, it had also sprayed bits of chewed-up dog food all over his face.