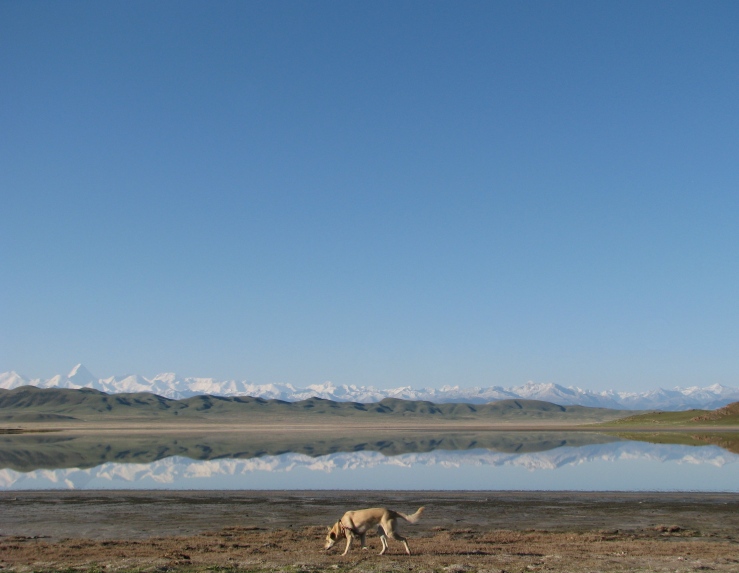 I like winter. I really do. But the relentlessly frigid temps, crusty sidewalks, and bulky winter garb have lately prompted deep feelings of summertime nostalgia. Sunglasses. Blue skies. Camping trips. Oh my.

The photo above is obviously not a recent one, but one that I snapped on our Memorial Day weekend camping trip last year. In it, Mishka trots blissfully at Tuz-Kul*. This photo is a glorious reminder that summer is coming. Or at least that it will come.

It’s very easy to hibernate in Almaty. I’ll certainly admit to spending the last couple of weeks hibernating; I’ve felt others doing the same. But Friday was different. No doubt the fact that it was Friday played a major role, and the fact that a brutal cold snap had just ended. But the difference was bigger than just these things. Better. Like everyone had decided, all together, to brush the ice crystals from their hunched shoulders, and emerge from their wintry dens.

I wouldn’t describe myself as a spiritual person, really. But there seemed to be some sort of positive, universal energy coursing through Almaty yesterday. Sam felt it too. Like something marvelous is on the way…

*This word means “salt lake” in Kazakh. Yup, the lake is salty. It’s super-duper smelly, too. Khan Tengri, the second-tallest peak in the Tien Shan mountain range, can be seen on the left horizon. This peak is located at approximately the place where the borders of China, Kyrgyzstan, and Kazakhstan meet.