New Year’s Eve is a BFD in the former Soviet Union. It’s the equivalent of our American Christmas. In fact, it’s virtually identical—complete with decorated fir trees, gift-giving, and a jolly old elf known as Father Frost who appears to be Santa’s twin in blue. (One notable difference is Father Frost’s companion. Supposedly his granddaughter, the relationship between Father Frost and Snow Girl, as she’s known, appears less innocent than it purportedly is. A result of Father Frost’s midlife crisis, perhaps?) Now throw back some vodka, light a ton of fireworks, and count down from ten: С Новым годом! (sno-veem go-dum!, or Happy New Year!)

Today marks two weeks after the beginning of the new year. This is the perfect time to assess the viability of one’s resolutions for 2014—it’s been said that it takes two weeks to change a bad habit…or to start a new, better one. A few resolutions tossed around the American community here include losing weight, participating in the Almaty half-marathon, being on time for things, making more of an effort to learn Russian, and my personal favorite: purchasing lamb from the Green Market and cooking it. Ignoring the Kazakhstan-specific nuances, these are all your run-of-the-mill resolutions.

It’s easy to make resolutions. We make them all the time. But the collective effort of goal-making that goes on at the beginning of each year gives these decisions extra heft. Accountability can be simultaneously our worst nightmare and our only reason for hanging on to the commitment we made when the clock struck midnight. Luckily, the close friends with whom we share our goals will still love us even when we don’t lose 25 lbs., or keep being late, or continue using the same four Russian sentences we’ve always used.

Alternative approaches to The Resolution are out there. The best I’ve learned so far is one that we adopted at this year’s celebration. A Soviet tradition—a wish—not a resolution. Before the completion of all twelve strikes of midnight, one must do the following: 1.) write a wish on a small scrap of paper napkin; 2.) set the wish on fire, being certain to catch all of the ashes on a plate; 3.) tip the ashes into a glass of champagne; and finally 4.) drink the entire glass—champagne, ashes, wish and all.

Nearly all of us were new to this tradition, which meant we made a lot of rookie blunders: burnt fingertips, snuffed candle flames. I’m guilty of panicking and dousing my flaming napkin in my champagne, making for a soggy, ashy gulp that stuck in my throat. Blegh. But after all of this, assuming you’ve managed to successfully complete all of the four steps above, and you’ve kept your wish a secret, it will come true in the new year…

Sorry, faithful readers, I’m not about to share my wish with you. But I will share some photos that prove Almaty is serious about New Year’s Eve…here’s to 2014!

New Year’s Trees for sale at the Green Market.

Nastya has holiday spirit: have you spotted the mini fir? 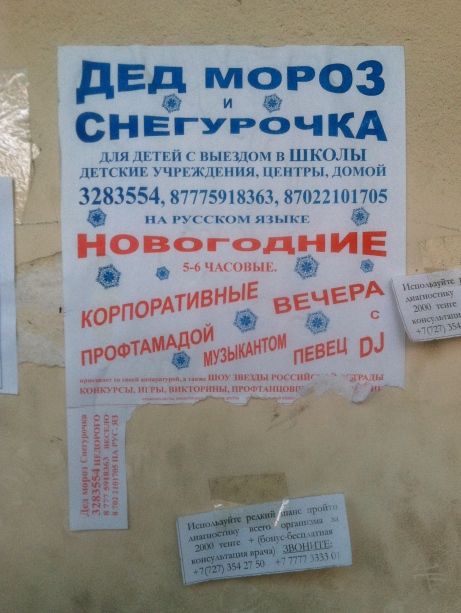 You could be the next Father Frost or Snow Girl! 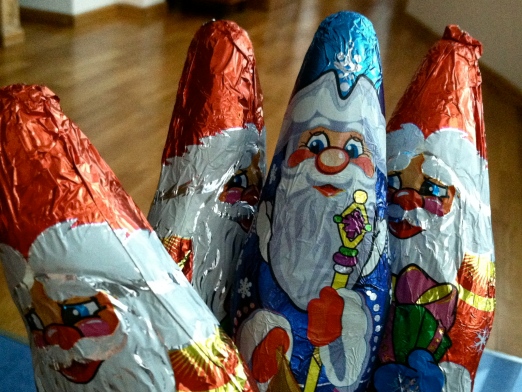 This shopkeeper celebrates the holiday! (Come back tomorrow at noon.) 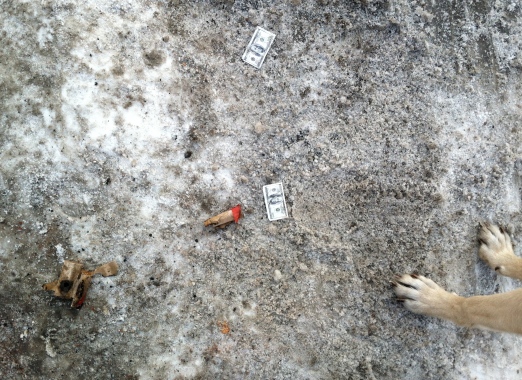