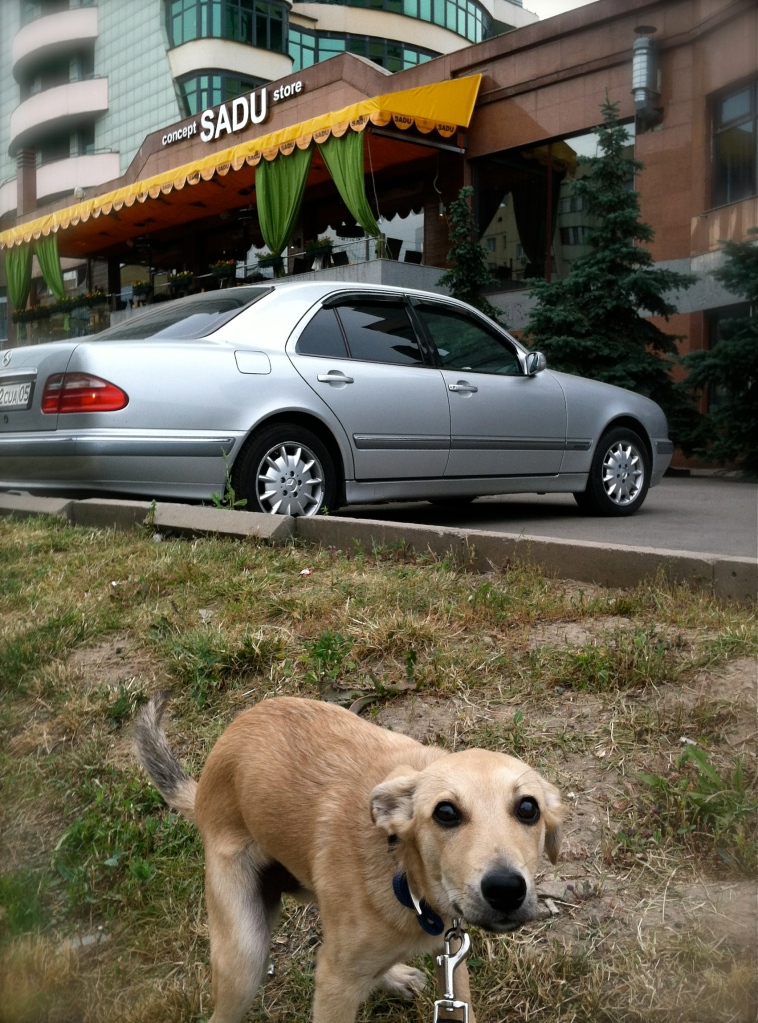 Five or six times each day I push my grimy feet into the nearest pair of shoes and venture outside with Mishka so she can do her business. After wending our way through the stilettos and Beamers, smoking bros and Bentleys in the parking lot downstairs, Mishka does the deed. The lives of the Kazakh young and rich come to a momentary, screeching halt as they stare: it’s almost guaranteed that I am wearing 1.) pajamas or 2.) sweaty running clothes, and I am picking up Mishka’s “deed” in a little plastic bag. With my hands.

On one such occasion, a construction worker asked me why I pick up the dog pooh. Unfortunately, the limited amount of Russian I know wouldn’t have allowed me to reply, “Because it’s polite,” or “Because I would probably step in it the next time I come outside with the dog.” Instead, I answered, “Я Американка,” or “I am American.” And as weird as this answer is, it’s actually desperately accurate. Yes: I pick up the dog pooh because I am an American.

The moniker “Priviledged Semi-Untouchables” is not my own, but Sam’s. He coined this phrase one evening while we were talking about Almaty’s opulent emergence from Soviet rule, and its spectacular wealth set against a much larger backdrop of filth and corrugated steel. We, as American diplomats, sit somewhere in the middle. We appear (or are assumed to be) wealthy based on where we live, and the fact that we are Americans. But we aren’t—our closets aren’t brimming with beautiful clothing; our car is just a modest Toyota.

Still, we can get away with things that only the truly fabulously rich can: wearing pajamas in public; eschewing corrupt bribery attempts by the local police; going to expensive restaurants to eat, not just to be seen. We maintain celebrity status just for being Americans, but are approachable because we aren’t amongst the truly un-touchable Kazakh elite. We exist in status purgatory, floating somewhere both outside of and exactly in the middle of the dominant Kazakh socio-economic groups.

Many of my faithful readers know that (when I’m not running or writing or tending to the animals in my life) I’m building an online art business. Unfortunately, Sam and I are still waiting for the bulk of our belongings to arrive in Kazakhstan—and with them my art supplies. Sure, Kazakhstan has artists, and art stores, but nothing like we have in the states. In a “developed” country, the art stores are practically bursting with potential. In a “developing” country, you best not expect to even find an art store. Here, in a so-called “second world country,” you never know what you’re gonna get. It might be a random assortment of ceramic tools; it might be lovely drawing paper, but nary a drawing pencil in sight; or it might be—as was the case on my most recent art store visit—post-it-notes and binders.

I spent half of my bike ride home cursing Almaty for its shallow-showy-ness, $60-steak-Porsche-store-in-the-mall-ness, while its art stores are filled with little more than poorly assembled notebooks and cheap watercolor paints—the sort that were on your back-to-school shopping list in 2nd grade. I spent the other half of the ride thankful, almost to tears, that I grew up in a place where I had access to so many mind-opening, quality art materials, and money enough to buy them.

Since arriving in Almaty, I’ve spent hundreds of dollars on art supplies from America. I’ve made friends with the folks at the Paper Source headquarters in Chicago, and convinced them to do their first all-email cutting order. I’m fairly certain that I’ve become Dick Blick’s newest favorite customer. And while I’m willing to accept that life overseas will be full of compromises, art supplies is one area where I’m not sure I’ll ever be able to find that middle ground.